Sant Jarnail Singh Jee took Amrit when he was about 5 years old and remaining committed to prayer was made his life long aim. Daily they would recite 110 JapJee Sahibs and the Panj Granthi whilst doing his farming duties. They remained at their village and were engrossed in meditations for 11 years. He had little formal education but his memory was astonishing. Sant Jee memorised the following Bani’s Dakhani Oankar in 1 day Sukhmani Sahib in 13 days and Sidh Gosht in 1 day and Asa Di Vaar in 8 hours.

Under his Jathedari of Damdami Taksal Sikhi Parchar with much fervour and passion was started for 8 months they did parchar touring Punjabi villages/cities Madh Pradesh U.P Bombay and Calcutta and other areas arriving at which they performed effective Parchar. They were about to embark on their second tour of parchar when on 1978 Vaisakhi the Nirankaris had announced a large gathering/programme. Sant Jee accepted the challenge of the Nirankaris. The Government and Anti-Sikh sentiments started to say that Sant Jee was an extremist and terrorist but still Sant Jee came out untarnished and the Damdami Taksal’s fame and respect kept rising.

The Damdami Taksal were the first to take note of the anti-Sikh practises of the Nakali Nirankaris Damdami Taksal’s Jatherdar and Singh’s in 1953 had discovered that the Nakli Nirankaris were distorting the message of the Sikh Guru’s Sikh history Sikh religion and discipline. The discoveries of Damdami Taksal were never acknowledged or attempted to be understood by many. About 18-19 years from today in Tamil Nadhu some low-cast Hindus became Muslims and the whole of the Hindu society was angered and worried by this act. Even in Indian parliament the question was raised as why the low castes Hindus are converting to Islam. As a direct result of which organisations such as Vishav Hindu Pareeshaad and Verat Hindu Samelan were born. In Hindustan there is about 87% Hindus of the population (approximatley 60 million). If out of the Hindu nation some convert to Islam then this is seen as a threat if the Sikhs who are 2% of the population are attacked ideologically this is not seen as a threat. To get to this conclusion does not need much assessment. This threat was first pointed out by the Damdami Taksal; the Damdami Taksals aim from its onset has been to tackle those opposed to Sikhi. To make opposition to those opposing Sikhi is not to oppose other faiths. It is similar to the Hindu faith followers of low castes converting to Islam opposing this it is not necessarily opposing Islam. Damdami Taksals primal duty has been to tackle attacks on Sikhi- regardless if they are sects of Sikhi or exterior threats but it is not to oppose other faiths.

Sant Jee found out that the Nakali Nirankaris were going to do a procession in Amritsar in which their leader and his wife will be seated in a canopy and that much anti-Sikh propaganda will be done. Singh’s sent by Sant Jee and the Akhand Kirtani Jatha went peacefully to protest against the Nirankaris but the Nirankaris met their peaceful nature with gun fire and 13 Singh’s were martyred and many were injured. After this bloody encounter their event still carried on for more than 3 hours. The government openly supported the Nakali Nirankaris. On 24 April 1980 the Nakali Nirankaris leader was assassinated for this assassination both the government and the Nakali Nirankaris made Sant Jarnail Singh Jee a prime suspect. On 9 Sept 1981 Lala Jagat Narain was assassinated and a warrant for arrest was issued for Sant Jarnail Singh Jee. Sant Jee voluntarily courted arrest on 20th September 1981. He was taken too many places and questioned on many issues whilst in custody. But no evidence was produced against Sant Jee and he was released without charge.

On 26 April 1982 a Morcha (campaign) was started to get Amritsar holy city status. Some Singhs of the Jatha and Bhai Amrik Singh Jee (AISSF) were arrested. Sant Jee began the Dharam Yudh Morcha on 19 July 1982 to get the innocent Singhs freed. The Dharam Yudh Morcha was also adopted by the Shiromani Akali Dal on 4 August 1982 and they declared that the Morcha would continue until all demands of the Anandpur Sahib resolution were met. In the first three months of the Dharam Yudh Morcha 40000 Singhs courted arrest. The Delhi government weren’t giving an inch and not even one of the demands were met. Due to the press coverage and mass participation in the Dharam Yudh Morcha the government began to criminalise and persecute the Sikh community through its propaganda and tools of state machinery. The government propagated the view that Sikhs wanted the whole of the India to be divided into many nations and that Sikhs were enemies of Hindus. They propagated the view that the lives of Hindus in Punjab were under threat and that an exodus of Hindus from Punjab had begun.

The Asian Games of November 1982 were being held in New Delhi. The Sikh leaders had expressed their desire to inform the world media at the Games that Sikhs had been discriminated against since independence in 1947. Prior to independence Gandhi Nehru and the like who had given promises to the Sikhs had not fulfilled these promises. Indira Gandhi hinted to Bhajan Lal that Sikhs should be discriminated against during the games due to Bhajan Lal’s orders every Sikh was interrogated prior to entering Delhi to ascertain if they were terrorists or not. They were treated very badly they were rigorously searched and questioned to the extent that Ex-Cabinet Minister Swaran Singh Retd. Air Chief Marshal Arjan Singh Retd. General Arora were even interrogated. Sikhs were given a strong message that they are 3rd class citizens and that they are unwanted residents of India. This disrespectful unwarranted treatment was not criticised by state or central government the press or intellectuals did not question this disgraceful treatment. No Sikh Congress Minister resigned in protest. Only one conclusion could be drawn from these events Sikhs are an oppressed minority in India.

Indira was convinced that the Congress Party Sikhs were that low that even if she ordered an army assault on Sri Harmander Sahib they would remain silent and would tow the party line. She was confident that the Shromani Akali Dal would be taught a lesson and they would not dare step out of line again. Leading Akali leaders gave assurances to Indira Gandhi that Sant Jee would run scared when faced against the might of the Indian Army and that they will not support him in the event of the attack. Many leading personalities of India and abroad discussed the Dharam Yudh Morcha with Sant Jee. Sant Jee would make all those who visited him content with his responses. Dr Subarmanim Swami who was a member of the Indian Parliament had to say after discussions with Sant Jee “If Sant Jarnail Singh is a terrorist then so am I.”

The government were failing in their propaganda attempts as they were losing to intellectual and well grounded arguments. They were getting frustrated and thus they sent the army into Punjab and put in place a state of emergency.

For the nation that the 9th Guru Sri Guru Tegh Bahadur Jee was sacrificed (as a matter of human rights) and in the independence of India 92% of those who were killed by the British were Sikhs instead of being grateful they attacked Sri Harmander Sahib and Sri Akhal Takhat Sahib on 1st June 1984. Thousands of army personnel and tanks were used in the army assault and a fierce battle raged until 6th June 1984.

Some leading Akalis had informed the government that when they (the army) win the battle upon gaining control of Sri Harmander Sahib then Sant Jee and his associates will join their hands and surrender and the heroics of the Taksal will end. In 1983 one journalist even had the audacity to write that the heroic stories that the Sikhs narrate at Gurpurbs and never tire in retelling they are myths like the Puranic myths. The Delhi government were convinced that Sant Jarnail Singh would surrender and that Sikhs would be totally disheartened after the attack and will become apathetic and controllable. The outcome of the attack they thought would be an end to the rebellious nature of Sikhs and an assimilation of Sikhs into the Hindu fold Sikhs simply becoming long-haired Hindus.

In March 1983, Sant Jee learnt of all these evil plans and the prevalent threats to Sikhs and devised strategies to lead the Sikhs through this critical and historically definitive period. He attempted to ensure that the dreams of the enemies of the Panth were not prosperous and that the cause of the Sikhs received global media attention. In the eyes of the world the Sikhs made a unique victory with Operation Blue Star as the government had to stoop so low in attempting to silence the Sikhs making history. In the battle that ensued Baba Thara Singh (Damdami Taksal) Bhai Amrik Singh (President AISSF) General Subegh Singh and many others were martyred Sant Jee heeding the advice of the Singhs went to an undisclosed location. 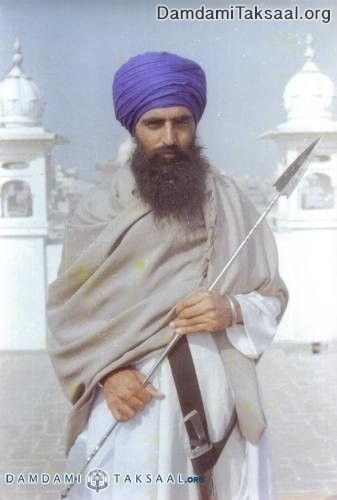