Respected Panthic diamond treasure-trove of knowledge Brahm Giani complete in the practices of the Khalsa Sant Giani Gurbachan Singh Jee Khalsa Bhindra(n) Vale was born on Wednesday 12 February 1902 at Amrit Vela (Ambrosial Hours). After his birth he was bathed and taken to the Gurdwara into the presence of Sri Guru Granth Sahib Jee the Birth Ceremony was performed and Amrit was given to Sant Jee. Karah Parshad was prepared Ardas performed and a Hukamnama taken. Sant Jee was named from the first letter of the Hukamnama per Sikh tradition.

His parents were devout Sikhs and due to the religious outlook of the household from a young age Sant Jee started placing a Rumala over a stool and doing Chaur over it with peacock feathers as a child. In childhood he learnt the correct pronunciations of the following – Panj Granthi 21 Vars Bhagat Bani & Das Granthi and memorised the 5 morning Nitnem Prayers. Upon listening to Kirtan Sant jee’s spirit would get uplifted to some inexplicable inner spiritual state of enjoining at the feet of Satguru jee. Due to the guidance of his paternal uncle at the age of 7 years Sant Jee was an Akhand Pathee of Sri Guru Granth Sahib Jee.

At the age of 13 years he also mastered the Sanskrit language he read Ramayan Mahabharat Yoga Vishest and other Vedic Granths after understanding and pondering on the teachings of these Sant Jee read the Faridkoth Teeka of Sri Guru Granth Sahib Jee authored by 52 Nirmala intellectuals he gained much knowledge from this. But the spiritual taste/elixir he was searching for was not discovered.

In 1920 Sant Sundar Singh Jee arrived at Village Akhare on their preaching tour it was here upon meeting Sant Sundar Singh Jee that the young Sant Gurbachan Singh gained the inner peace that he was searching for. The Jaap/mediation of Vaheguru Gurmantar began intrinsically. By listening to the Katha and Kirtan of Sant Sundar Singh Jee Sant Gurbachan Singh’s heart was finally filled with peace and bliss. It was at this point that he felt he should become a part of the Khalsa Panth and he took Amrit. He became such a true Khalsa that he made his life a continuous penance such a blissful repetition of Simran began which he enjoyed to his last moments a non-stop invigorating meditation. Mind body and wealth were all sacrificed at the feet of the Guru. After seeing the Nanakana Sahib Shaheedi Episode:

They imbued the spirit of this quote into their lifestyle. On the top floor of Sri Harimander Sahib (Amritsar) they meditated on Gurmantar and Moolmantar for 3 months.

They attained the great living of the above quote and gained much spirituality through their meditations and prayers.

Daily he would rise at 1am after doing ishnaan – they would do simran for 45 minutes. His daily duty was to do the ishnaan of the Gurdwara Sahib to perform Sri Guru Granth Sahib Jee’s Parkash and to recite Sri Japji Sahib and Sri Sukhmani Sahib and to start the Kirtan. He performed his duty with much affection purity dedication commitment and discipline. He listened to Sant Sundar Singh Jee narrate the Katha of Sri Guru Granth Sahib Jee a total of 4 times and was educated in the following by Sant Jee – Bhai Gurdas Jee’s Vaars & Kabit Svayas Bhai Nand Lal Jee’s writings Sri Dasam Granth Sahib Sri Guru Panth Parkash Sri Gur Bilaas – 6th & 10th Guru and many other accepted writings. By reading meditating listening accepting and practising Gurbani the true mystical meanings of Gurbani were realised by him. He got educated in other faiths to further his knowledge he studied Yoga Vedant Panj Dasee Moksh Panth & other Granths along with which he studied Sikh History. He read 125000 Japji Sahib’s and performed 3060000 meditations of Mool Mantar and countless meditations of Vaheguru simran were performed during this period.

In this manner his mind was always attuned to Gurbani. At night whilst asleep he would even start uttering Gurbani in his sleep. His voice was very sweet his pronunciation of Gurbani was always correct (Shudh) due to his immense love with Gurbani Sant Sundar Singh Jee appointed him his Paathi (reciter of Gurbani) for Katha. Khalsa Jee’s waking of Amrit Vela (1am in this case) daily recitals Sri Guru Granth Sahib Jee’s seva and his joy and respect in performing this seva sweet and gentle character understanding of mystical meanings of Gurbani his achievements and love of Sikh discipline all these qualities are of the few Gurmukhs that have existed. When reciting Paath for Katha Khalsa Jee would raise his living/spiritual experience to the stages being narrated.

Sant Sundar Singh Jee narrated the complete Katha of Sri Guru Granth Sahib Jee at Boporai Khalsa Jee was the Paathee throughout the Katha and on the day of the Bhog (close) of the Katha he honoured Khalsa Jee (Sant Gurbachan Singh Jee) with a Siropa (robe of honour) and he said to the sangat “With us (in the Jatha) we have countless Gurmukhs who have got educated some have gone on to full-time employment many have gone on to get entangled in the demands of a householders life (Grahist) but the teachings that were taught to me by Sant Bishan Singh Jee Murale Vale it is only Khalsa Jee who has met all the teachings of Sant Bishan Singh Jee. Sant Bishan Singh Jee honoured me with many gifts and today I place all these gifts in the keep of Khalsa Jee. The Jathedari of Damdami Taksal started by Sri Guru Gobind Singh Jee is being given to Khalsa Jee – with this Siropa.

On 15 February 1930 Sant Baba Sundar Singh Jee ascended to Sach Kand and Khalsa Jee stayed at Boporai and completed the Katha of Sri Guru Granth Sahib Jee 3 times and after about 3 and half years along with 16 lucky Gurmukhs they started doing Parchaar on a touring basis. Gurbani Kirtan Katha preaching educating Singhs – making them astute in all aspects of Gurmat and initiating others into the Khalsa Panth were the foremost aims of Khalsa Jee.

On many occasions they would walk many miles along with the Jatha Singhs. Punjab Kashmir Peshawar Benares Patna Sahib Jagannath Puri Rameshwaran Sri Hazur Sahib Calcutta Bombay were all visited and Parchar done. In India there are only a few areas/cities where Khalsa Jee did not visit in their life to grow the tree of the Sikh Nation and bless people with Amrit/initiation into the Khalsa Panth. Khalsa Jee’s dedication to Khalsa discipline and promotion of solely Gurmat was truly a heart-felt passion.

Just as a lotus flower stays detached/floating along water in the same manner Khalsa Jee was forever detached from Maya (worldly illusion). Thousands were initiated into the Sikh-fold being enlightened by Khalsa Jee thousands were taught the correct pronunciations of Gurbani and countless Gianis were moulded. In literature Khalsa Jee has immensely contributed by writing various tracts/pothis about Gurbani and Sikh History and Sikh discipline. He did the construction seva of many Gurdwaras. His katha was so inspirational that if one heard it the once they never forgot it and they would listen to it repeatedly to further their lifestyle to higher morality and spirituality.

Whilst doing Katha/Kirtan Parchar – the Sangat invited him to Village Mehta Khalsa Jee accepted the invite and went to Mehta. On 28 June 1969 at Mehta on Thursday at 2.10am their breathing started slowing down and whilst doing Vaheguru Simran Khalsa Jee merged back into the light that he had come from (back to God). Taking Khalsa Jee to Amritsar Sahib water was taken from the Amrit Sarovar and Khalsa Jee’s ishnaan was performed outside the Gurdwara complex. According to Khalsa Jee’s wishes he’s body was cremated at Patalpuri – Sri Kiratpur Sahib.

On three occasions prior to ascending to Sachkand Khalsa Jee had commented on Sant Kartar Singh Jee becoming the next Jathedar of Damdami Taksal Sant Kartar Singh Jee was a great scholar a Gursikh complete in Khalsa discipline forever reciting Gurbani and of high morals and spirituality. All the Sikh world will forever be indebted to Sant Giani Gurbachan Singh Jee Khalsa who for the benefit of humanity for approximately 40 years dedicated their life to Gurmat Parchar and gave thousands direction in improving their characters/lifestyle. However much we talk about their sacrifice it is still little and we cannot express true gratitude or complete praise of their inexplicable seva. 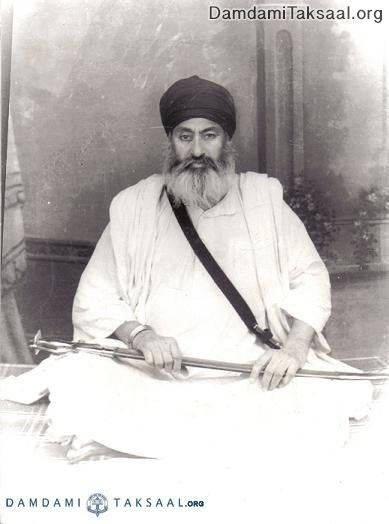 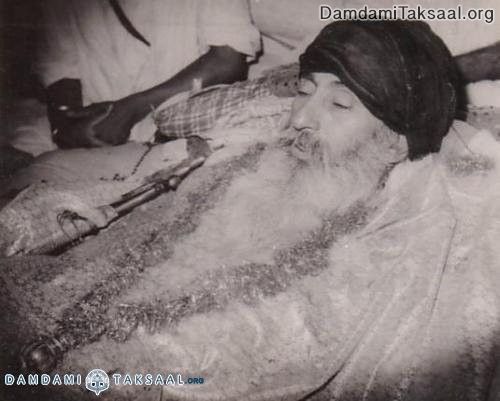