Bhai Dasaunda Singh and Mata Lachmi ji from the village Leel (near Khemkaran) District Amritsar came to the live in the company of Sri Guru Gobind Singh Sahib ji and the Sikh Sangats (Congregation). Guru ji commanded them both to take part in the Seva (selfless service) of the house of the Lord with love. Impressed with their selfless service Guru ji granted their wish and blessed them with a son who would be a saint-soldier Baba Gurbaksh Singh ji was born in 1688 AD.

At the age of 11 in the year 1699 Baba ji entered the path of Sikhi by taking Khande di Pahul (initiation ceremony of Sikhi known as taking Amrit). Baba ji was15 years old when both his parents passed away at Anandpur Sahib. Bhai Mani Singh ji and Baba Deep Singh ji taught Baba ji Gurmat Vidiya (Knowledge) he was also trained in Shastar Vidiya and became members of Baba Deep Singh ji's battalaion.

When Sri Guru Gobind Singh Sahib ji left Anandpur Sahib He ordered Baba ji to stay there and continue Gurmat Parchar (preaching Sikhi) and manage the Gurdwaras. Upon the Shaheedi (Martyrdom) of Baba Deep Singh ji Baba Gurbaksh Singh ji was appointed as the next Jathedar (Leader) of Damdami Taksal. Just like Baba Deep Singh ji Baba ji produced Pothis and Gutke (anthologies) of Gurbani and sent them to places of need.

In 1765 when Ahmed Shah Abdali attacked India for the 10th time Baba ji was the Jathedar of both Damdami Taksal and Sri Akal Takhat Sahib(Sikh Temporal Throne). After bathing in the holy Sarover (pool of nectar) along with 30 other Sikhs from his battalion Baba ji offered Karah parsad at Sri Harmandir Sahib (Holiest Sikh Shrine) and at Sri Akal Takhat Sahib and then made the following ardas to Guru Sahib ji: "Satguru ji may my Sikhi last with my kes (hair) intact." After taking Hukam (the command from Guru ji) from Sri Guru Granth Sahib ji and reciting "Ghoriaa(n)" (a prayer abot marriage) the Sikhs stated that they were going to wed death. The Afghan forces of Ahmed Shah Abdali attacked the Sikhs and a vicious war began. Das Hazari Khan and Baba ji were in battle they simultaneously landed blows upon each other and they were both decapitated.

Baba ji continued fighting without his head seeing this the enemy were horrified and were quick to retreat. Baba ji continued killing off the tyrants and was relentless in his attacks a Muslim Saint advised the Afghan army said that the only way to stop Baba ji who wouldn't retreat was to beg for forgiveness at the feet of the Sikhs Guru for all the atrocities they caused and promise not to come back again. "Forgive us our misdeeds and evil actions" their General begged. It was only then that Baba ji stopped and laid his body to rest. 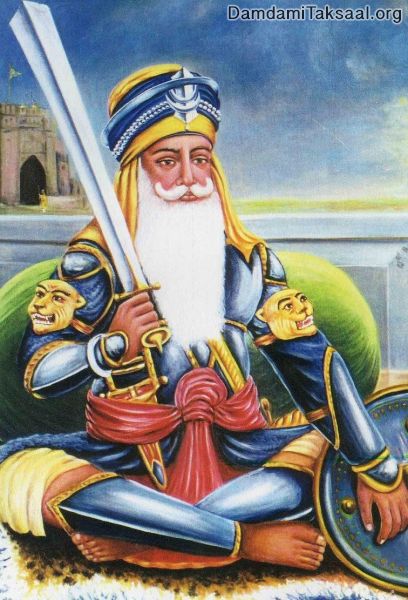